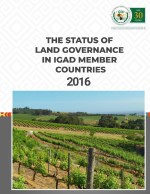 Land is a primary asset for survival and development in Eastern Africa. In most of the countries pastoralism is a major land use owing to the limited amount of arable land - Uganda has the highest proportion of potentially arable land at 70.8% , while Somalia is at 3.8% and Djibouti at 0%.

The countries have different laws governing land as a consequence of their colonial history, diversity of cultural and religious norms, and endowment with natural resources. The region is characterized by political instability. Conflict is a major concern, as Eastern Africa has the largest number of refugees and internally displaced persons (IDPs) on the continent. Desertification, climate variability and climate change are a major concern in this region, a region that has substantial desert mass. Drought and floods pose serious challenges for land management.

Given the centrality of agriculture and natural resources to both the livelihood and economic well-being of people in the region, land in turn has a central role in the operationalization of the cooperation arrangements.

IGAD understands that governance is at the centre of societal development. Policy plays a critical role in guiding the choice-making process, identifying the problems to be addressed, establishing parameters and putting in place structures and institutions. Policy should be designed in close consultation with all stakeholders. Where policies are designed without the informed participation of the target groups, and without taking into account their unique realities, their impact is usually negative. The IGAD land governance project is designed taking into account the significance of participatory processes in its member states in the development, implementation and tracking progress in the implementation of land policies.

IGAD together with LPI undertook an assessment of the key land issues in the East and the Horn of Africa. The highlighted issues are among those for which the AU Framework and Guidelines on Land Policy in Africa identified and made proposals for policy formulation and implementation. IGAD priorities these issues in the implementation of the AU Declaration on land issues and challenges in Africa.

The main objectives of the project are to: