Unique among African countries, the ancient Ethiopian monarchy maintained its freedom from colonial rule with the exception of a short-lived Italian occupation from 1936-41. Ethiopia is the second most populous country in Africa.  More than 70% of Ethiopia’s population is still employed in the agricultural sector, but services have surpassed agriculture as the principal source of GDP.  Ethiopia has the lowest level of income-inequality in Africa and one of the lowest in the world. 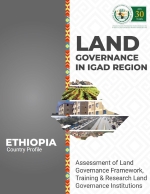 The Federal Democratic Republic of Ethiopia (FDRE) is located in the horn of Africa, bordering with Eritrea in the north, Sudan and South Sudan in the west, Somalia and Kenya in the south and Somalia and Djibouti in the east.  The total land area is 999,541 sq. km (385,925 sq. miles) and is home to 73 million inhabitants.  It covers an area of 1,127,127 sq. km, of which an estimated 34% is agricultural, 9.6% is arable, an estimated 3.6% is forested, and 48.9% is covered by woodlands and shrubs.  Only 4.5% of arable land is irrigated.  Protected areas encompass 14% of Ethiopia's land area.  An estimated 15% of Ethiopia's approximately 80.7 million people live in urban areas, making it one of the least urbanized counties in the world.

This Article critically analyzes the law and the practice on women’s right to and control over rural land in Ethiopia.  The study employed doctrinal legal research and empirical quantitative methods to collect and analyse data from primary and secondary sources

The overall aim of the study is to identify the fundamental causes of conflicts, their implications and the range of options for community-led peace-building and conflict-sensitive development interventions in the two study areas of the Kuraz and Hamer districts of South Omo zone in the Southern Nations Nationalities and Peoples Regional State (SNNPRS) of Ethiopia.  Both of these districts are cross-border areas.  It also aims to recommend ways that national, regional and international processes could support conflict prevention and resolution in the region.

Ethiopia is sometimes referred to as the "water tower" of East Africa because it is home to the headwaters of 14 major rivers (BBC, 2004).  However, unpredictable rainfall and a lack of reservers have resulted in the country's heavy dependence on food aid and occurrence of chronic famine (Woodhouse and Ganho, 2011).

Agriculture is the backbone of the Ethiopian economy.  This particular sector determines the growth of all other sectors and, consequently, the whole national economy.  On average, crop production makes up 60% of the sector’s outputs, whereas livestock accounts for 27%, and other areas contribute 13% of the total agricultural value added.  The sector is dominated by small-scale farmers who practice rain-fed mixed farming by employing traditional technology, adopting a low input and low output production system.  The land tilled by the Ethiopian small-scale farmer accounts for 95% of the total area under agricultural use and these farmers are responsible for more than 90% of the total agricultural output.

The land management and governance system can be the underlying cause for materializing the opportunity or face the challenge of rapid urbanization. The urban land lease policy of Ethiopia is considered the most influential factor that determine whether there exists unhealthy, haphazard and unbalanced investment environment in the cities. Since land is constitutionally stated owned, it lays the foundation for acquiring ‘land use right’ through auction or negotiation. The paper critically reviews the policy and its institutional arrangement. It quantitatively analyzed the fundamental factors that drive the value of land developers place on urban land for investment using the land auctions data obtained from Addis Ababa City Administration. Base price, plot size, location and grade and auction period have significant effect on land value in the city. Plot use type and developers’ capital have mixed effect. Our findings suggest that the implementation of the land lease policy still requires reexamination of constraints and opportunities with the aim of devising appropriate measures and strategies for action towards sustainable urbanization. The institutional mechanism should be designed to provide ‘appropriate’ incentive for developers and accountability for bureaucrats. It should also help to facilitate cities to transition from dependence on revenue from land sale to modern taxation, and consider the capability of the rural citizens, who are expected to displace as urbanization progresses, to access the opportunities and their entitlements for integration into cities throughout the urbanization process

We, the nations, nationalities and Peoples of Ethiopia:

Determined to build by the exercise of our right to self -determination, for ourselves and of our own free will, a single political community which is based on our common consent and the rule of law so as to ensure lasting peace, an irreversible and thriving democracy and an accelerated economic and social development for our country Ethiopia;

Strongly convinced of the necessity of respect for the fundamental rights of individuals and of the nations and nationalities as well as the even development of the various cultures and religions for the attainment of these objectives;

Convinced that we, the nations, nationalities and people, with our own individual and admirable culture, territories and modes of life have, by virtue of the fact that our country Ethiopia has been and still is our common home in which we have formed a common bond of relationships in various fields and in varying degrees, developed a common interest and outlook;

Recognising that our common destiny needs to be based upon the rectification of historically distorted relationships and promoting common interests;

Convinced of the necessity of building a single economic community so as to promote our common rights, freedoms and interests;

Determined to ensure the maintenance of the peace and democracy we have achieved through our struggle and sacrifice;

Now, therefore, in order to consolidate these aims and beliefs, do hereby adopt this Constitution through our representatives in the Constitutional Assembly.