Uganda has substantial natural resources, including fertile soils; regular rainfall; substantial reserves of recoverable oil; and small deposits of copper, gold, and other minerals. Agriculture is one of the most important sectors of the economy, employing 72% of the work force. Oil revenues and taxes are expected to become a larger source of government funding as oil production starts in the next 3 - 10 years. 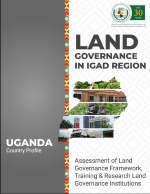 Uganda is located in East Africa and lies across the equator, about 800 kilometres inland from the Indian Ocean.  It lies between 10 29’ South and 40 12’ North latitude, 290 34 East and 350 0’ East longitude.  Uganda is a landlocked country located in East Africa.  It is bordered by Kenya in the East; South Sudan in the North; Democratic Republic of Congo in the West; Tanzania in the South; and Rwanda in South West.  It has a total area of 241,551 square kilometers, of which the land area covers 200,523 square kilometres.  Land is probably the most invaluable asset for the citizens of Uganda.  With more than 80% of the population rural and directly deriving livelihoods through subsistence agriculture, land access, ownership and use are core to economic, social and environmental drivers.  According to the Uganda Bureau of Statistics report on the National Population and Housing Census 2014 the total population in 2014 was 34.6 million.

In Uganda, the legal and policy framework guiding and governances is enshrined in a number of laws and regulations governing Land. The key ones are as follows:

Issues of access to land and realisation of land rights have always existed in Uganda as women are considered to be potential land owners.  Such rights usually have to do with the rights of individuals to particular plots of land, but also with rights to land held collectively.  The situation in post conflict northern Uganda was brought about by the displacement of people from their villages, but it only served to perpetuate this situation.  The conflict in northern Uganda began in 1988 between the government of Uganda and the Lord’s Resistance Army (LRA)

Recent decades have seen substantial parts of Central and West Africa plagued by civil war.  Attempts to explain these wars commonly stress the problem of state recession, combined with the emergence of warlords and warlordism (see Thomas, Kiser and Casebeer 2005; Lezhnev2005; Green and Ward 2004; MacKinlay 2002; Rashid 2001; Shawcross 2000; Rich 1999; Reno 1998).  Less examined is the behaviour and actions of the non-state armed groups fighting these conflicts, and how these may or may not change over time.

The East African Community (EAC) suffers from a critical lack of cross-border railway networks that, if remedied, could improve regional connectivity and boost intraregional trade.  The region would also become more investor friendly.  Cross-border railway connectivity is particularly important owing to the challenging geographical location and small, uncompetitive and inefficient

This paper provides an overview of existing agricultural policies in Uganda and how they address the key AgriFose 2030 target groups that include smallholder farmers, women and youth.  One of the main policies in Uganda’s agricultural sector is the National Agriculture Policy (NAP) which deals with commercialization of smallholder agriculture through accessibility of financial services such as loans.  However, NAP lacks a consistent implementation framework thereby hindering proper transformation and increase of agricultural production in the sector

Kampala exbibits informal urban expansion typical of cities in sub-Saharan Africa.  Of note about Kampala's urbanization process is the extent of informality estimated to comprise about 60% of all urban developments.  Though there exists a diversity of circumstances and factors that contribute to informal urban developments, this study focused on land tenure considered key in land development because being the rules underlying a people's relation to land, rules of tenure define rights to land, how these rights are accessed and even influence developments put on land depending on the security accorded to land rights.  This study assessed the effect rules of tenure have on urban developments in Kampala by examining land access, land subdivision and land development processes (considered the three stages where informality can occur) in the land and property development process

We The People of Uganda:

Recalling our history which has been characterised by political and constitutional instability;

Recognising our struggles against the forces of tyranny, oppression and exploitation;

Committed to building a better future by establishing a socio-economic and political order through a popular and durable national Constitution based on the principles of unity, peace, equality, democracy, freedom, social justice and progress;

Exercising our sovereign and inalienable right to determine the form of governance for our country, and having fully participated in the Constitution-making process;

Do hereby, in and through this Constituent Assembly solemnly adopt, enact and give to ourselves and our posterity, this Constitution of the Republic of Uganda, this 22nd day of September, in the year 1995.

For God and my country.