About The IGAD Land Governance and Pastoralism Forum 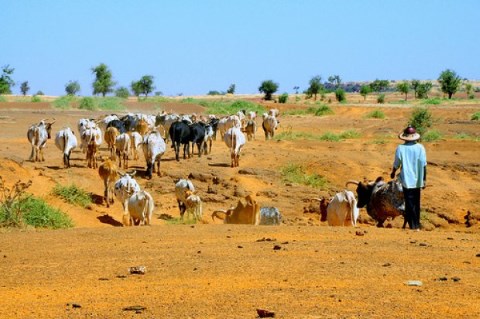 Arid and semi-arid lands (ASALs) dominate the landmass of IGAD region – form 60-70% of the total landmass. ASALs receive less than 600mm of rainfall per year and are susceptible to cyclical patterns of short and more persistent droughts. Pastoralism, an extensive and mobile rearing of livestock on communal rangelands, is the major livelihood and production system practiced in ASALs thereby employing a greater percentage of the population. Pastoralism involves mobility to access seasonally available pastures and water. There are also agro-pastoralists who are largely sedentary, combining livestock rearing with crop production.

Pastoral management in ASALs is based on the utilisation and management of seasonal pasture: dry season and rainy season pastures. Traditionally, dry season pastures are deliberately not used during the wet season to enable them to regenerate for use during the dry season. Thus permanent use of one area is avoided to prevent depletion and degradation of pasture, and large tracts are seems left idle during the rainy season. Thus pastoralists are not concerned with the management of fixed territories of land, but adjust their grazing grounds in relation to climatic factors, in which they may have to negotiate access to pastures with their neighbours. This results in pastures being held as common property rather than individual property, in which multiple users negotiate and compete for rights. In some instances, rights to pastures may be established through the control of wells and access of livestock to water rather than through land.

Pastoral land management strategies have been poorly understood in national policy frameworks, where pastoral lands are considered to be under-used, poorly managed, and degraded. This leads policy-makers to assume that pastoralism is outmoded and that pastoral lands would be better protected, managed, and conserved if they were allocated to other sectors. These perspectives legitimise the appropriation of pastoral lands and heighten the vulnerability of pastoralist. However, pastoralists make considerable contributions to national economies. For example, in Sudan the pastoral-dominated livestock sector contribute 80% of the agricultural GDP; in Ethiopia pastoral areas supply the export of live animals.

Pastoral land use strategies are not easily translated into policy. Land policies have tended to confer land rights on the basis of individual claims to specific plots of land. Policies that recognise rights to land based on development and investment in the land have worked against pastoralists and in the favour of farmers, who have frequently been able to claim rights over land established in dominantly pastoral areas. As a consequence, pastoralists have lost considerable areas of land to other land users. The boundaries of rangelands are not stable and they are often constructed out of political interests and contradictory claims of different groups, rather than constituting distinct, authoritative and historically defined categories. As a consequence, pastoral rights in land are not easily reduced to individual title, and pastoral areas are easily encroached upon by other users.

The African Union (AU) policy framework for pastoralism explicitly recognizes the rights of pastoralists, and the need to provide security, services, infrastructure and economic opportunities in pastoral areas. The framework supports pastoralism as a way of life and as a production system; it recognizes importance of mobility to make efficient use of rangeland resources. The AU framework and guidelines for land policy, as adopted in July 2009 by the AU assembly of heads of States and government, explicitly supports measure designed to improve indigenous tenure arrangement and acknowledge the legitimacy of indigenous land rights. It recommends that national land policy processes must recognize the role of local and community-based land administration/management institutions and structures, alongside those of the State. The framework highlight that protection of pastoral ecosystems will require policies that address issues of tenure security, the role of pastoral communities in pastoral management.

Recent land reform initiatives in the IGAD countries, based on customary rights, have attempted to recognise the land rights of pastoralists. The Ugandan Land Act enables common land associations to obtain customary certificates for their common lands and group rights to manage and protect their interests in rangeland management. Kenya’s community Land Act (2016) provides a framework through which customary holdings are to be identified and registered. A review of land governance legal, policy and institutional frameworks for IGAD member States and rangeland management of the three RPLRP countries was conducted by IGAD in 2016. In general policies supporting pastoral land governance are adopted by most countries but implementation is very week.

Previous study shows that in sub-Saharan Africa 70% of rangelands are considered moderately to severely degraded. Degradation manifests itself through the increase of bare ground and the replacement of perennial grasses by undesirable plant species resulting in reduced forage availability. When land is poorly governed, the associated problems often lead to disputes, land degradation and lost socio-economic development opportunities. Land governance is critical for reducing poverty and for enhancing economic development, gender equality, social stability and sustainable resource use. Failure to resolve land issues increasingly recognized as a barrier to achieving other development objectives, including the SDGs.

The overall Objective of the Forum is to enhance pastoral land governance convergence among IGAD member states especially in the cross-border areas in order to enhance sustainable development of pastoralism.