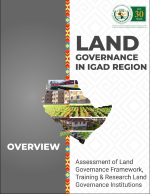 Most countries in the region have juristic or diffusive plural legal systems governing land. Consequently, multiple sources of property rights coexist. These are broadly categorized as customary and statutory/modern tenure, whereby statutory legal structure and customary practices interface. Very often, this increases uncertainty and confusion when people pursue different ways to legitimize claims to the same parcel of land. In addition, the presence of diverse tenure concepts or laws may create ambiguity. Different sets of rules are applied under different institutions in the same area. Parallel institutions could lead to competition for the same jurisdiction which could fuel conflict.

The "refugee" definition does not cover the new range of circumstances under which people are forced to leave their country of origin in search of a destination that will respect their most fundamental human rights. The specter of climate change and environmentally induced displacement are just one aspect of this broader issue of survival migration. People have been forced to flee their country due to a combination of State fragility, livelihood collapse, and environmental disaster. The absence of a clear normative and institutional framework for the protection of non‐refugee survival migrants is a challenge for the IGAD region. While environmental displacement, State fragility and increasing threats to livelihoods increasingly interact, a new governance framework to manage this crisis is becoming more crucial.

Very often, societies accept migrants who then enjoy security provided they honour the conditions of their tenure agreements and other social contracts. Their access to land may have no finite time limit even though they might be considered temporary residents. Conflicts may emerge subsequently when circumstances change. For example, in periods of economic downturns or land shortages, the acceptance given to migrants by local communities may be withdrawn. Conflicts may also arise when "outsiders" gain access to a community‘s land in a manner that does not follow customary rules. The most violent and serious conflicts derive from an explosive mixture of political manipulation of competition for land and challenging of national affiliations against a background of ethnic divisions.

Ensuring tenure security for customary land rights in this region is an essential element for sustainable development, given the predominance of customary tenure. In addition, communities whose land has mineral and oil deposits, who border reserve land and those on land earmarked for infrastructure and urban development, also suffer tenure insecurity. Growing populations, declining soil fertility, increasing environmental degradation, climate change, the HIV/AIDS pandemic and new opportunities for agricultural commercialization have all heightened demands and pressure on land resources and caused land conflicts and tenure insecurity. Land and property rights have become the subject of fierce competition and conflict leading to increased tenure insecurity for those who are weak and disadvantaged.

The inequitable resource access, demographic pressure and resource degradation are key drivers in violent conflict. Conflicts in the region are centered on access to and control over land and valuable ecological resources (including timber, water, productive pastures, minerals and oil). Land conflicts have emerged over the competitive use of land based resources, e.g. pastoralists have land use conflicts with sedentary communities practicing agriculture (Uganda, Somalia and Sudan). Armed conflicts are often both a cause and an effect of land conflicts. In post-conflict situations, the land and shelter needs of returnees (IDPs and refugees) must be carefully managed to avoid further conflicts and violence.

Weak Rights of Women to Land

Gender discrimination in access to and control of land remains a serious impediment to development. One of the most serious obstacles to increasing the agricultural productivity and incomes of rural women is their insecurity in terms of land tenure. Traditional/customary systems that might have protected a woman‘s access to land during her lifetime are breaking down under population, economic and environmental pressures.

Access to land and security of tenure are necessary for people to raise and stabilize their incomes. They are essential prerequisites for diverse land based livelihoods, sustainable agriculture, economic growth, poverty elimination, for achieving power in markets, and enhancing food security among others. The contribution of land to food security is evolving and ever changing, lacking clarity at this point of whether to promote large scale agricultural production or family farming and small holder production as a way forward to guaranteeing food security.

Land is a major support not just for agricultural production, but also for the processing and the marketing of these products. Apart from the statutory systems, different parts of the world have traditional systems for land management and administration. These systems and principles are not always homogenous, and they can be either conducive or prejudicial to effective land management and as such impacting on food security.

The NEPAD initiative is committed to economic growth, development and increased employment, reduction in poverty and inequality and regional integration. It is apparent that growth in the industrial and service sectors in the region. Many countries in the region are now scrambling to attract private investment into these sectors, and capital from the developed world will seek opportunities to supply the foreign direct investment (FDI). It is necessary to handle the implications of FDI drives for land policy carefully in order to protect the livelihoods of the poor and avoid generating political and ideological conflicts around land, and enable real partnerships between the private sector and the region‘s small holder farmers.

The variety of agricultural forms and participants in the sector requires that the property systems under which land is held and used are clarified. This is crucial not only for small holder farmers, whose access to land is based on customary tenure systems, but also for commercial investors, whether men or women, some of whom seek to engage in large-scale operations (including extensive irrigation networks). The ability to secure access to land resources through a variety of tenure systems that guarantee returns for short- or long-term investments is important if productivity in agriculture is to improve.

The first steps in the mainstreaming strategy are the assessment of how and why gender differences and inequalities are relevant to the subject under discussion, identifying where there are opportunities to narrow these inequalities and deciding on the approach to be taken.

Read more on  folder Land in the IGAD Region ...